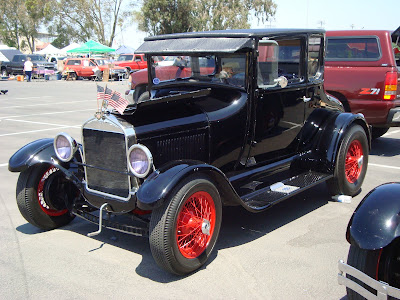 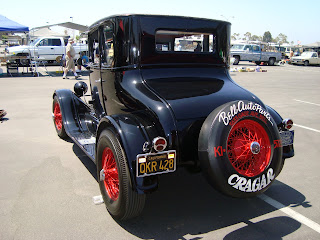 I attended the annual Long Beach Model T Club swap meet in Los Alamitos Saturday, and low and behold I spied a strikingly similar set of vintage Dayton wire wheels! They were under a very nice T coupe owned by a older fellow named Nick.
I got to speaking to Nick, turns out he knew Bill Bair. Talking some more, he said he bought his T from Joe Mack, long time owner of Obsolete Ford Parts, Joe died a year ago. Joe was a good friend of Bill’s as well. I found that fact out two weeks prior at the Trompers of Eagle Rock swap meet where I met John ‘Kretch’ Kretzschmar. Kretch, also good friends with Bill, saw the roadster at the Trompers swap and instantly knew he was looking at Bill’s car. Kretch worked for Joe for 30 years at Obsolete Ford, Bill hung out there often. 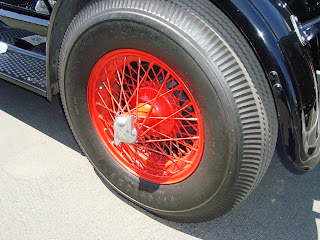 So now I able to put a few more connections together –Bill’s circle of friend is widening. And couple more puzzle pieces are coming together on the roadster's history.
I can't help but to find it interesting that both Joe & Bill had the same wheels on their cars. Exactly the same in fact –same color, caps, size. Either Bill bought the wheels from Joe, or Joe from Bill. I hope to know someday. 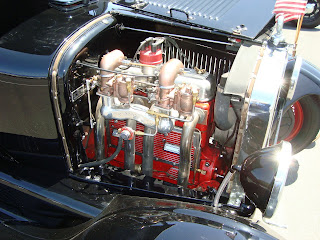 Joe loved that T, he kept it in is den apparently, so he could look at it all the time. I can see why, it is beautiful. Nick says he’s been in love with the T for 40 years. Finally when Joe called Nick and said he’d like to sell it (this was shortly before Joe's passing). Nick told Joe over the phone he'd think about it. But it wasn’t until Nick’s wife heard and said, “Sold!” was when Nick actually bought it.
Posted by AJ Elias