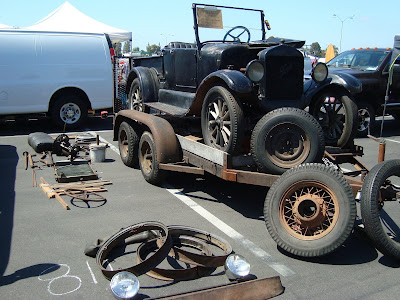 ...or as I like to call it, the LBMTCV&CPX.  The "T-swap" is annual 2-day event hosted by the Long Beach Model T Club starting on... Friday?  I'm guessing 98% of the members are retired.
Happily this year I was to be able to attend both days.  I spent about 10 over the two days searching the aisles and yapping it up with friends.

There are always cools cars to see and even better parts to buy.  Club swaps are always the best as far as bargain prices on hard to find parts.  I never try to miss them. 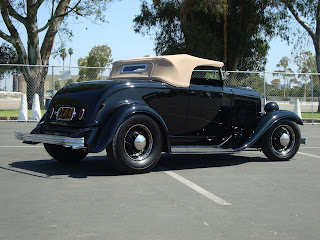 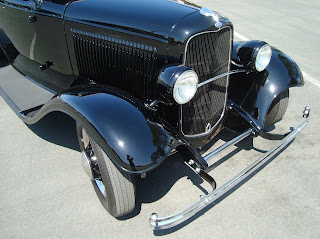 A very slick black 32 roadster, everything about it was cool.  Super nostalgic look with the Ford wire wheels, fenders, and chopped convertible top.

Odd that even the headlight rims are painted, but that adds to the nostalgia. 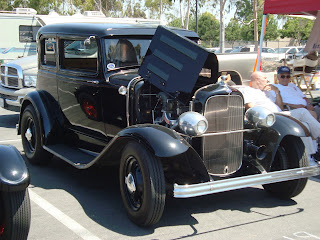 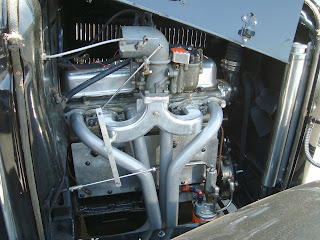 A rare 1931 slant-window Victoria, this one has some very real, very rare hot rod parts.  Very Cool.
I mistook this for a 32 originally, thanks to reader Fred A for the correction. 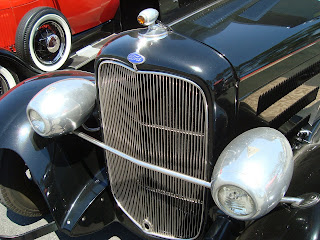 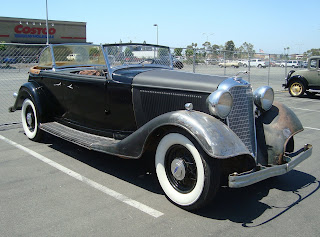 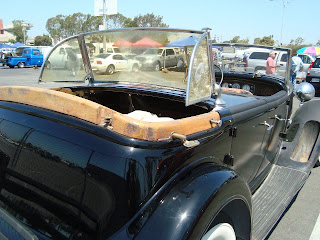 How about a 1933 Lincoln Dual-Cowl Phaeton Touring Car.  Looks like it's in the middle or a restoration, but it's nice to see it anyway.

I couldn't find the owner to ask how passengers get into the back seat. 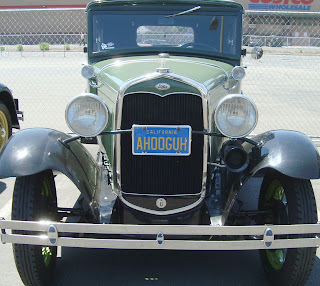 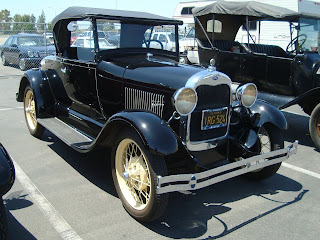 Lots of nicely restored Model T & Model A, like this perfect 29 roadster.  Quite a contrast from the hot rods I own. There were cars for all tastes.


Of course I bought parts!!! 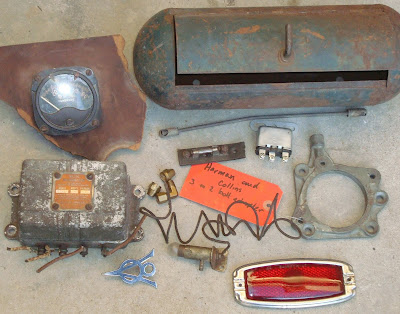 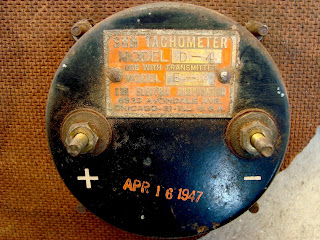 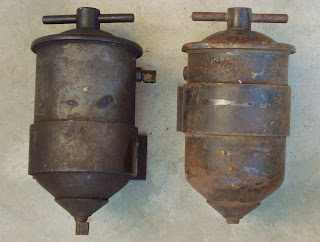 I bought one of these filters at the LA Roadster Show swap and sold it on ebay --I did very well.  So I picked up a couple more.

No self-respecting car club should be without a means of marketing themselves.  And in the traditional hot rod sense, it's done with a cast metal plaque screwed to the back a jalopy.

The A-V8ers are no different.  But as we are who we are, we'll make them ourselves! 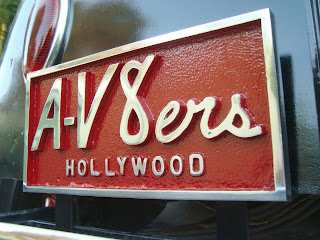 I promised almost a year ago I would show readers how I made the A-V8ers plaque  --and the wait is over!  But I gotta tell 'ya, it was one of the hardest things I've ever done.  From design to completion was an uphill battle.  Yes, the learning curve was steep.  But I gained many new skills along the way.  And the final result... glorious!

So click on the new page link: Our Car Club Plaque, to start making your own.
Posted by AJ Elias

The week following the LA Roadster Show I thought I'd show my appreciation to my good friend Ed Gallagher by crashing at his place in Denver for five days --and with only one week notice!

For the past few years Ed has lived in Parker, Colorado working for the Starz Network in Denver. And he's been wanting me to visit The Mile-High City to show me the car sights and the car he's building.  So after his seven trips to LA, I thought it was time for me to go Rocky Mountain High --Colorado.

Ed only comes back to LA twice a year for two reasons: a good car show, and a better car show.  And I always welcome him to stay on our couch in the one-bedroom apartment where my wife Wendy & I live.  He was here for the LARS just the week before. 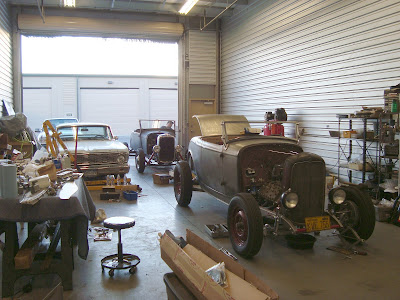 That's Ed driving in the 1928 Model A-V8 he built while he was living in Burbank.  And since moving to the Denver area, he's built another car; a nostalgic '28 roadster pick-up he sold through ebay.

Ed's Colorado garage has plenty of room for both his classics and the '32 roadster he's currently building. 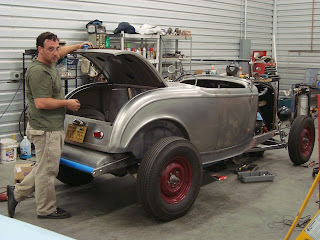 Yes, he's moved on to bigger and better things --literally!  The 32 is a bit larger then the A-V8s we're used to.  It's taller, wider, and much roomier inside. 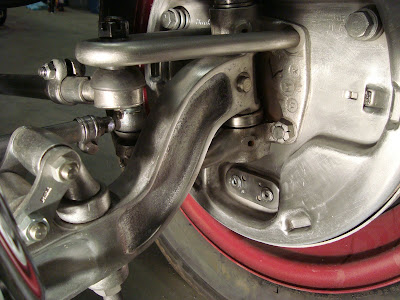 Ed has time and space to do it right.  Nothing rusts due to the consistently arid environment.  So there is no rush to paint conditioned parts such as his frame, suspension, or bare metal deuce body. 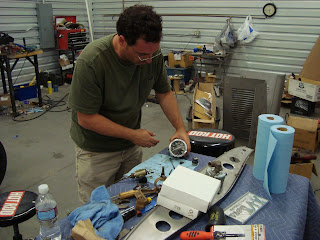 With the exception of the body, the majority of the car is vintage Ford parts.  Ed resurrected the original deuce frame & suspension that was once used as a hayride on a Nebraska farm.

Here, Ed is working (I assisted) with the vintage 1950s 8K Stewart Warner tach & mechanical drive that will mount on the front of the flathead V8.


Ed's friend Art is a true Model A enthusiast and builder.  He has about ten of them, mostly stock but a few modified. They are all beautiful and Art lives to drive them... and I'm talking about 1000 mile trips.  He's got a '28 roadster hot rod much like Ed's, coupes, sedans, a pick-up, a wood-paneled station wagon (I'm not going to say it), and a very fun looking one-seat speedster.

Sure there were many quality street rods & customs like you'd see at any national meet.  But also a lot of cars you wouldn't see in (for lack of better words) fashion-conscience Southern California.


Every part of this machine was to-the-extreme!  It's hard to find words to describe it.  It's even a four-seater so the family can come along.
I have to believe this is part joke/ part rebellion from over-prices street rods. Please be a joke!

This one is a little tamer.  But none the less out-there.  I think it's made from what the owner had around, and less of a "statement car" like the one above. 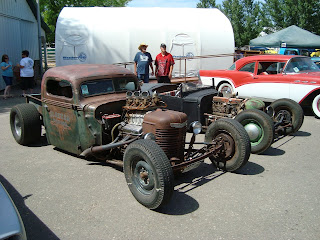 Now this was more like what I expected! Honest hot rods with tractor grills.  I really do appreciate these --no joke.  From the Heart-Land! 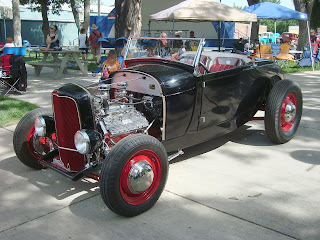 We liked this Hot Rod.  It had a great stance and all the nice parts: flatty, QC rear, aircraft seats, 18" rear wheels, 32 frame, etc.  And just enough chrome to keep it down to Earth. 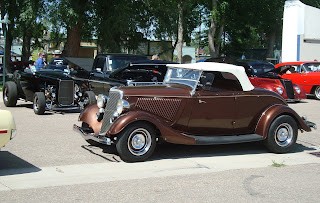 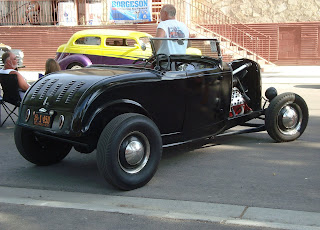 This is Eric Schill's deuce.  Once a dry-lakes racer, it has a speed-trial plaque on the dash. It also still has a lot of old-fashioned mods, and was pretty cool to see up close.
Posted by AJ Elias