Written as a companion to my earlier post Home-Made Hairpins. 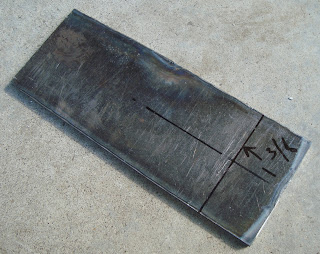 I spent part of Presidents Day completing brackets needed to attach the front hairpins & rear end radius arms to the Model A frame.

Earlier, I flame cut 3" wide strips of 3/8" 1/4" thick steel plate to use as the base to which tapered-hole bungs will be welded.
A lot of hot rodders would stop there, drill holes, and bolt this mount straight down, off the side of the frame.  I'm going for a more finished look, so I'll take it a few steps further.


Next, I heated and bent the plate 90°.  Evenly heating a band to a dull red (front & back) just above the vise, made hammering the steel over easy as cake.  I used a Harris #2 Rosebud tip.  From lighting the torch to the completed bend took about one-minute.  Then let the steel air cool off the vise. 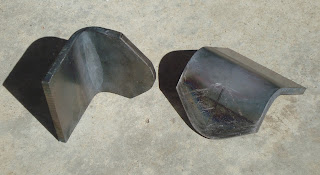 After marking the piece, I used my cutting torch this time, to cut off the excess.  Then using the bench grinder to clean it up a bit.  Next I cut & shaped a hole to fit the tapered-hole Speedway 'shock mount'. 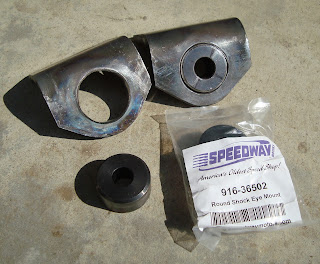 Hot rodding books from the 50's told readers to cut off tapered tie-rod eyes from steering arms found on car spindles.  This could still be done today from just about any junk car or truck.  But at $2.99 each from Speedway Motors, it's much cleaner & easier. 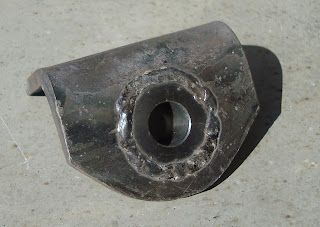 After fitting the mount into the bracket (making sure I have the correct side of the mount facing out), and chamfering the hole as a valley for the weld, I set the welder on high.  A nice MIG weld bead, front and back, completes the joining of two pieces.

Some final machine sanding, and the brackets actually look a little too good for a 1950's track car.

(A sketch with measurements is useful when making multiples of something.)

The next thing I have to do is fit the rear radius arms with threaded tube & tie-rod ends.  Then tack these brackets to the underside of the frame rails, after I've 'measured twice'.

Parts Listed, I'm Back In Business

In an effort to make some cash and clear some space at home, I've started to list parts on ebay again. I'm hoping to make selling vintage auto parts a habit once again.  Although it takes a lot of effort, the rewards can outweigh the work involved.

And so you don't think this is an entirely blatant attempt at getting more bids --I'm giving you, my loyal readers, a special discount.

If you win an item, I will subtract the price of shipping (up to $10 off) from the final value (but only antique car and speed parts at sell for over $10).  Just send me an email through ebay stating that you read The Hot Rod Disorder, and I will revise your invoice crediting you the price of the shipping.  So I guess it can pay to read my written rambling.

Check out my auctions here:  LAHotRod
These are a few items that ended February 22, 2011:

All my items start at 99¢, even the intakes.  And I normally never have a reserve.  I like the action! 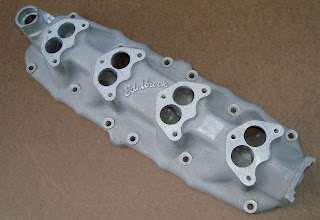 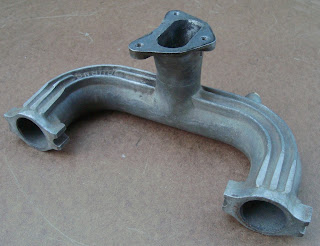 Here is an intake from the Bill Bair collection.  A very early BURNS intake for Ford Model A/B 4-cylinder engines.  Designed for use with a Stromberg or Holley, to replace the factory updraft carb.  Pretty rare, and old. 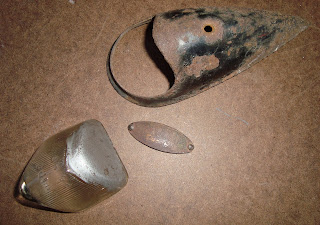 Salvaged from an impossibly poor GUIDE 682-C headlight, these were the only solid parts left.  They are perfect if you are missing a something. 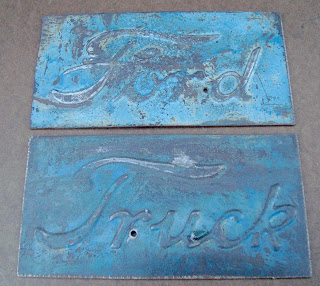 And something I bought at the last LA Roadster Show swap as an impulse buy.  A very cool set of Ford script chopped out of a late 1930's commercial truck.  Beautiful natural patina.

I hate to give them up because they are really cool.  Ford used incredibly heavy steel for tailgates back then, easily more the 3 mm thick!

Final Sale Price: $202.50 (much, much better!)
There was a fierce bidding war in the last minutes. This makes up for the low intake sell price.
Selling on ebay use to be a regular thing for me.  Then things changed at work, and listing parts wasn't as convenient as in the past.  I was really good at it too (I'm bragging again).  So here's to new starts!
Posted by AJ Elias

Now that the GNRS is over, I've had a few days to digest what went on, what went wrong, and what I can do differently in the future.

I don't see entering a car in a major car show as personal entertainment, it's far from it.  Apart from being a lot of work, I also risked damaging the car due to Sunday's rain and transporting it back & forth.  In addition to the loss of sleep and the stress, I used two days of vacation from work & spent hundreds for dollars out of pocket.

Unfortunately for me, my black roadster, the car that represents me was relegated to a dark area of the hall, up against the wall.  It was packed in tightly between a green jalopy and a row of tables.  In retrospect, I should have spoken up and asked to be placed among the rows of other cars.  But by the time I realized it was in the worst spot in the place, it was too late, the place was full.

Entering this show is really more for networking, or promoting one's car or building talents, or other reasons I don't know --rather then for fun.  So in many respects, this enterprise in self-promotion was a bust, a failure, a total wash.  So, I'll have to chalk this one up to experience once again.

I came to the show because I wanted people to see the car that they may have only seen on the internet. I wanted to talk to them about it.  And show off all the cool things it has, that no other roadster does.
Perhaps the general public would take photos and publish them on online forums, I hoped... or maybe have one picture in car magazine's show coverage.  The magazine coverage is a wait & see.  But I have a feeling I won't be seeing any pictures of the car.

Ryan from the Jalopy Journal, who happens to be quite fond of my car, was my only saving grace.  He picked Daytons as one of ten HAMB cars to compete for the Jalopy Journal: Best Roadster trophy.  Not surprisingly, the car that won was in contention for the AMBR award, and is the sweetheart of the HAMB membership. Daytons came in next to last --I'm not disappointed at all by that. Just happy to be nominated.

I did talk to one person momentarily about the car... but that's it.  I also spoke to Dave Valles and family on Sunday.  He's the fellow whom I bought the car from in October 2009.  It was nice to show Dave the car now that it was fixed and complete once again.  But he's known the car almost all his life.  So I really never connected with anyone new about the car.

Perhaps I should have spent more time beside the car rather then strolling.  Unfortunately again, it was parked near the stage where bands were playing at volume levels so high it pained me and many others to stay in the room.

I'm not sure why the car was put where it was, I'd like to think the organizer was well intentioned.  But in the future (I'll still go back), I'll push for where I want to be first, and not compromise.

For the average spectator, if you can afford the entry & parking, it's a fabulous show.  For the participant, it's a major pain in the ass!
Posted by AJ Elias