5:09 AM - Got up after only one hit to the snooze button, showered, dressed.  I put the kettle on, made coffee.  Hit the road for some serious swap shopping. 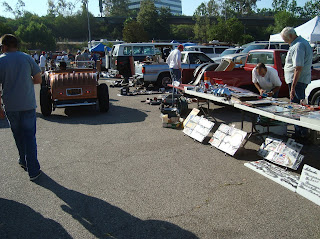 6:03 AM - Eagle Rock, CA.  I pull up to the Tromper's Car Club swap meet and it is already in full swing!  I'm already late?!?  It's a small parking lot filled with sellers, swappers and some really great hot rods.
I can remember the last Tromper's swap as being very light in sellers and buyers.  But now --super busy!

Lots of sellers means there might be some good buys --and there were.  Friends aslo did well, or so I was told. 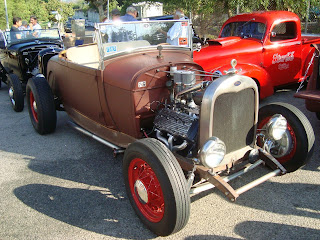 7:00 AM - I've already bought a lot and completed a thorough look though of all the sellers.  Do I leave or should I stay?
I start talking to friends about cars & stuff. 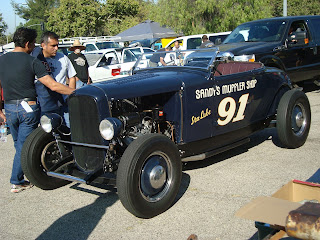 8:00 AM - I'm still talking to friends, and I've bought more parts. I start a new conversation with my other friend Michael who owns the Belond roadster; Sandy's Muffler Special.  He has great incite on tuning four carburetors and engine building, so we talk for an hour. 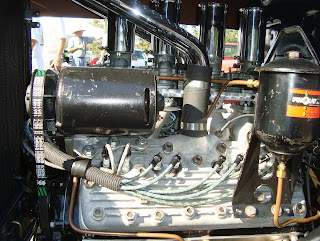 9:00 AM - Friend Dave Steele, finally gets a selling spot.  By now I'm feeling dehydrated and I'm holding even more parts.  Dave and I talk more, and I decide then, "Why not go to the Mooneyes show?".

10:15 AM - I finally leave.  I drive a just a block down Figueroa Ave to the Mobil station to fill up.  I also get an icy fountain drink and a turkey sandwich (breakfast).  I quickly ate in the car as I merged into traffic on the 134 Ventura Freeway. 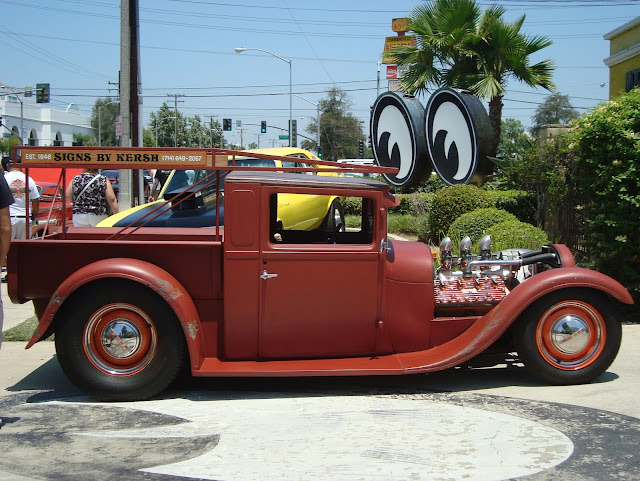 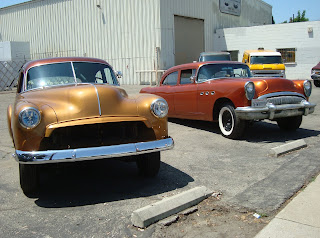 11:15 AM - Santa Fe Springs; Mooneyes Headquarters.  I arrived at the annual Mooneyes Open-House Party already over two hours in.  And it's only at light-pandemonium levels.
Like the usually quiet Tromper's swap, the usually crazy Mooneyes show is somewhat calmer then in the past. 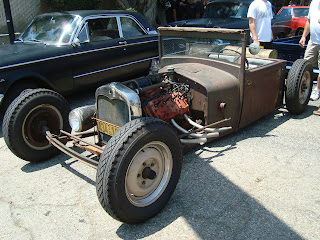 All the characters are there: Greasers, Burners, Rats, 4-door Customs, Lowriders, Bikers, Street Rods, Yellow Paint Vehicles, and a sprinkling of Japanese people.  The rockabilly music was only at a low scream this time, a pleasant volume level for a change.

I met Keith Weesner at his booth, he's a fellow hot rod owner & a local artist.  He mentioned he was having a gallery show in Santa Monica later that night... sounds like fun. 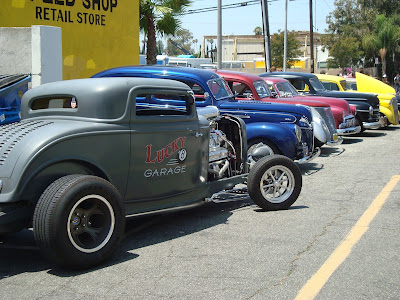 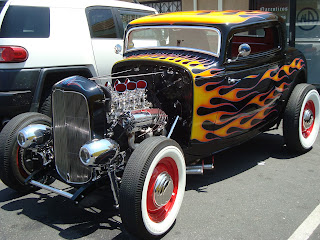 1:15 PM - Dave Steel finally arrives to the show in the Tommy Sparks roadster, just as the show starts to really die off. 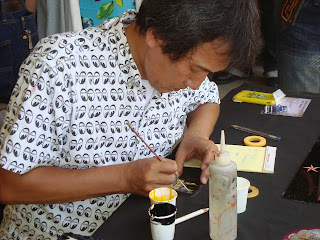 Dave brought the only legitimately old hot rod to the show, everything else there was non-vintage in the literal sense. I'm not saying non-traditional, because a Gasser is traditional, but no other car at this show was actually hot rodded in the 1940s or 50s like the Sparks car was.  If you disagree, let me know.

Mooneyes is a great company, there are few others like it that have survived time so well and still hold tight to their tradition of making brand name parts.  But I have always considered Mooneyes parts as 1960s/70s era look, not 1950s so much. 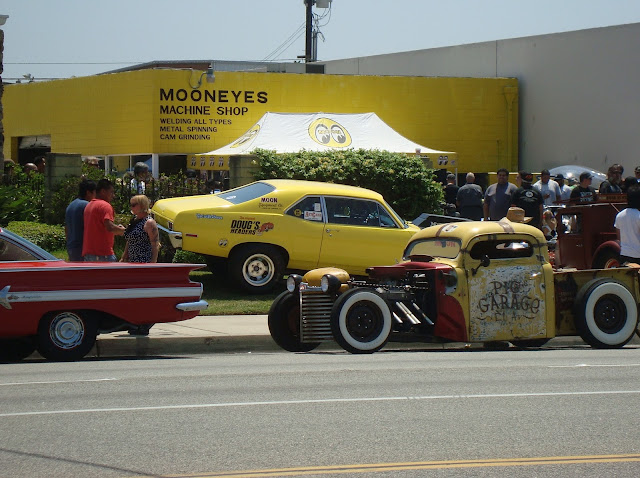 2:45 PM - The show is 100% over and Dave & I are pretty much the only party attendees left in the empty parking lot.  One last snap shot under the Mooneyes logo and we bid our farewells. And so I head for home. 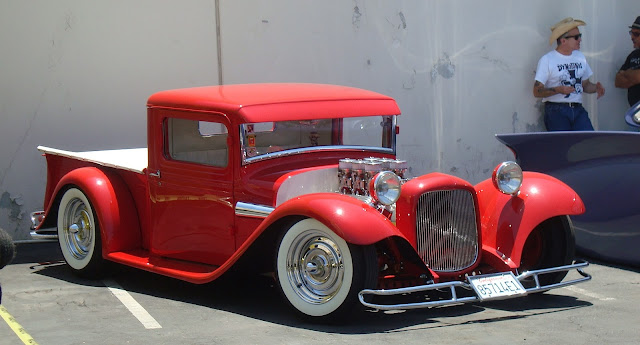 3:30 PM - I got home in Hollywood and unpacked the car of the earlier swap meet treasures.  I'll take a few minutes to relax after a very sun-filed, car crazy day.  I also took a moment to look up where the Weesner exhibit will show later that night. 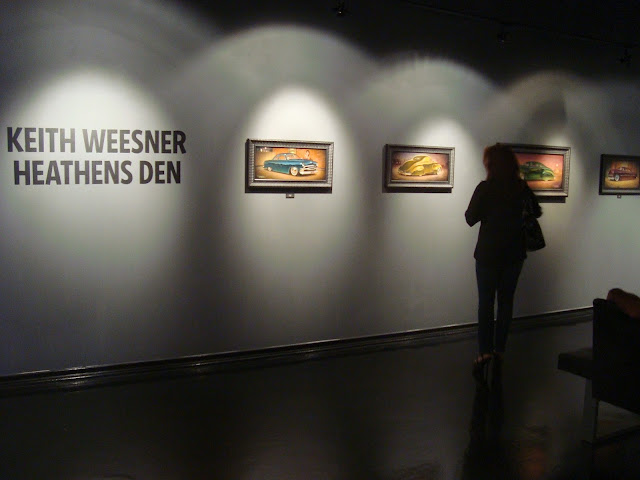 6:10 PM - Wife Wendy & I head out to Santa Monica  for dinner and a show.  We eat at Bombay Cafe Indian restaurant on Pico near Bundy. It was very nice, but after this visit we still prefer our Indian place only 3-blocks from home on Sunset blvd.

8:00 PM - We near the Copro Gallery were Keith Weesner has his show.  The Weesner showing in conjunction with a tattoo artists exhibit and the crowd is lively.  Keith has his pieces widely spaced on dark walls with spot lights --more like in a quiet museum.  While next door the tattoo art is crammed in, the room is brightly lit, and the art is scary to say the least (so were some of the visitors).
The Weesner painting are serene scenes of cars, scantilly clad babes, sometimes topless combined with cars.  It was really great to see the original art by Keith himself, the detail is fantastic.