Putting Fenders On My Model A

Some of you may agree, why put fenders back on a perfectly good looking, driving, roadster hot rod?  Well, it's something I always said I'd do ever since I pulled that rough original roadster into the backyard almost a decade ago and tore it apart.


I sold all of the non-hot rod parts off the car, like the brakes, bumpers, drivetrain and headlights.  But kept the fenders and brackets, hood shelves and latches.  I've been bumping into those parts and moving them around the yard for too long.  It was time to finally do it and put them on the car.

The fenders were in OK condition.  Decades of use was very apparent below the surface.  There were crack repairs already on them, and the fronts even has some filler.

Me, not a being an auto-body/sheetmetal repair type guy, took the front fenders to Troy at Hollywood Hot Rods.  His guys did a fine job of fixing three cracks and magically pulling two large dents.  The fenders were super solid again, and ready to use (in my eyes).

Again, I am not fluent in auto-body.  So after very minimal sanding, I spray painted everything.  OSH brand semi-gloss right out of the can.  I will understand if you are disappointed with me, but this is "shade-tree" hot rodding to say the least.  I literal hot rod in the shade of trees.  As a plus, the paint will match what is already on the car. 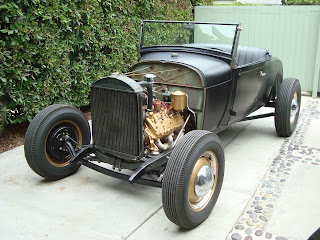 When I bought Goldie in 2003 (it had no name until Daytons came along), my first idea was a fenderless roadster.  It was going to be low with tall tires, I was going to put a Ford 260 c.i.d. (SBF was all I knew at the time), but those were all the plans I had.  Because I had never though I'd actually own an antique automobile, it was just a dream.

Today, nostalgic hot rodding is part of my life.  So I sort of owe it to my car to finally do as I said and get it on. 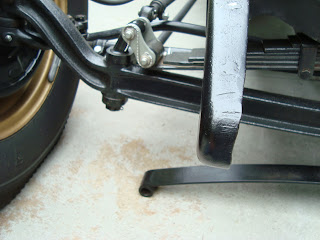 First thing to do, strip it down --getting off some of things that might get in the way.  Bye-bye shocks, grill, hood and lights.

Next, raise the front of the car.  Previous test showed that there was no way that the "kind of large" 6.00 front tires was going to go under the front without some serious upward movement of the front end.


Luckily I had another stock Model A spring just lying around.  I painted, then swapped in the standard eye main leaf, which added one inch of height.  Would it be enough?  We'll find out later. 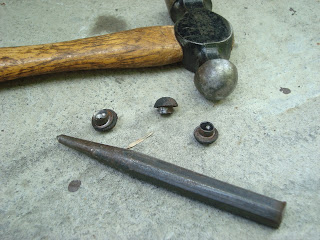 Now I'm moving on to attaching the brackets that hold on the running boards & front fenders.

Years ago when building the car I filled many of the holes in the sides of the frames for looks.  I welded up the passenger side steering box holes, and the eight motor mount holes.

I did myself a favor and never welded up the rivets that held the running board brackets on, I just ground them flush to the frame, whew! 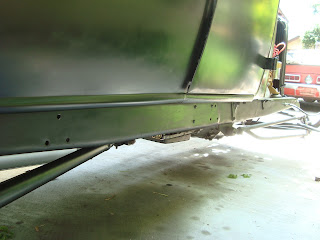 Except for the front fender bracket holes, I simply hammered out the rest of the rivets.  That was easy! 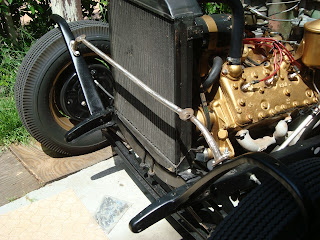 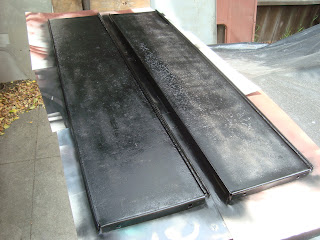 Sorry, I forgot to take pictures of the brackets.  But there are four that hold up the running boards. Of them, the front ones are the same left or right side, the rears are the smallest and are unique to the side of the car they are mounted.
The front fender brackets are the same on each side also.

Original step panel/running boards.  The tops are cratered from rust, very typical.  It's due to water & grit getting under the rubber, sitting and rusting away the steel.
My new running board rubber kit from Mac's was adhesive backed and very easy to use.  It will cover up that cratering and nobody will be the wiser. 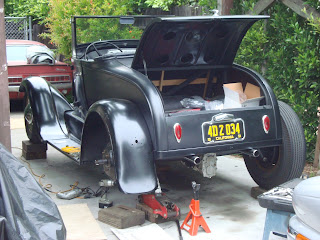 As it is coming along, one side almost done as seen here.

What you don't see is that the body bolts have to be loosened to get the side aprons between the frame and body.

With the body bolts  off or loose, I lifted the body up one side at a time with the jack.  The side aprons are secured to the top of the frame by two small bolts at each end.

Particular note has to be made where shims were needed to keep body alignment.


7 PM with two days left to work on the car before the show and I still don't know if the tires will rub fenders, time for a spin...

I start up the car and a turn to pull it out the steep driveway, and right away lots of angry tire noise!

Aah! The car looks so great!  But had to go much higher in front, damn.  So I took the spring up, not all the way back to stock, but close.  From seven leaves, up to ten leaves --adding almost three-quarters of an inch more height and stiffening up the suspension just a bit more. 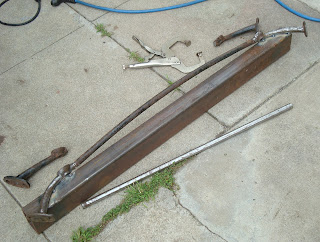 Next problem: a stock 1929 headlight bar doesn't work with a 32 grill.  Time to do some chopping and fast! 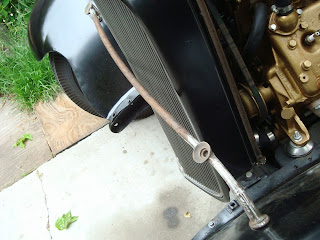 Out of my stash of parts, a curved 1930 Ford headlight bar to fill the center.  A little cutting and a bit of welding --job done! 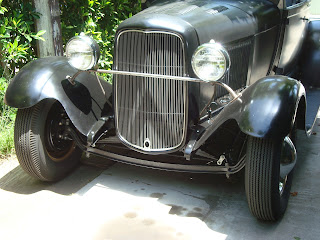 Friday, ready for action and one last problem --my axle caster is way off!

I forgot that by raising the front end the caster degree is now less then 3º.  The car doesn't want to drive a strait line.

So I'm back under the car adjusting the suspension with only hours to the show.

Well it was all worth it!  I finished in time for the show and the car looks pretty nice. 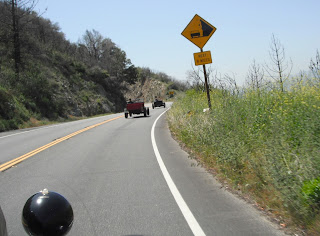