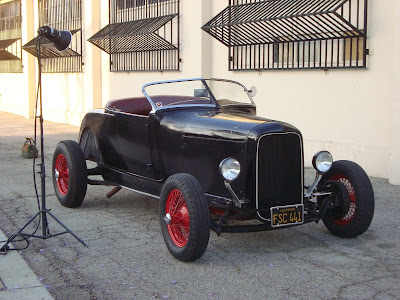 It actually happened! I own a car that is worthy of being shot for a major car magazine. Good old Daytons will appear in Rod & Custom Magazine --issue date to be determined. It’s just really exciting to think I may get a little recognition for my hot rod prowess, for the ability to find a gem, and that maybe my disorder does have merit.
I have to thank my friend Ed Gallagher, also Axle from GNRS, for bringing attention to the car to Aaron Kahan of R&C. Not that it took too much persuasion. Aaron had interest in the car from the beginning.
As the story goes, Aaron has a friend (the second fellow to call about the car) waiting at a nearby diner to see the car if I were to pass on it. I’m still not sure whom it was that was waiting, but it’s a friend of Verne Hammond as well. Verne being a member of the same club Aaron is in, the Burbank Choppers.
The photographer was Timothy Sutton. Absolutely, one of the nicest people I have ever met. He is a newer freelance photog for the magazine, but a real pro. He’s shot a few cover cars lately, and really has a great style. Tim also shots fashion photography; he brings his own lights to the shoot –something I wouldn’t have expected in an exterior car shoot. 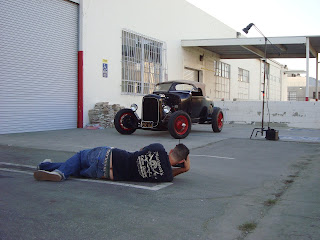 Before I knew Tim personally, I had already noticed the difference he had made in the look of cars in the magazine. The look Tim achieves in the cars he’s shot have been, let’s say --‘more energetic’, maybe ‘flashy’ for lack of better adjectives. He also can add a heap of drama. Drama from the lights he brings, remember. Tim can add life to static cars, some glossy reflections on the sides, interesting fore & background shots with multiple cars. It’s all in the details.
I must bring up the Chris Casny coupe from early 2010, because it caught my eye right away. It happened to be the first car Tim shot for the rag. I instantly noticed it was a side-step from the mag’s usual stuff. He had a driving shot from tire height, I thought “wow, this is different!” Also a long shot from a roof of the coupe on a railroad bridge. Which happened to be a bridge I’ve driven by many times in Burbank.
In my opinion, Tim is a welcome relief. I really don’t want to put down the magazine's recent past, but some of the cars features have been a real snooze.
Now to the shoot of Daytons. Tim asked if I knew any locations I liked as backgrounds for the car. I drove 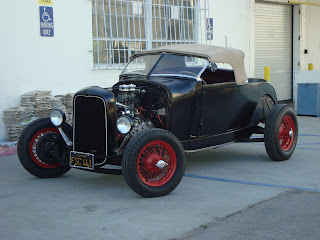 around took some photos, but it wasn’t very fruitful.
The day of the shoot Tim did a little scouting, but we ended up in tried and true, Culver City’s old industrial area off Jefferson Blvd.
Tim had me move the car around a lot, getting great shoot angles obviously very important. Ed was in town for the LA Roadster Show, so he helped. We drove the car to three different backgrounds, some with lights set up, some without. Tim had us mix & match parts; the hood on, no hood; canvas top on, no top.
Just before the last shots, Tim had me turn the car around. I got in to start it –the starter stuck! A minute of head scratching, starter hammering, we just push started it. Took a few more shots and back to home we went.
Tim wasn’t done with us yet. It was dark now and Tim had the idea of shooting me driving Hollywood Blvd and night. It was terrific & hectic, but I think the artist got what he wanted. 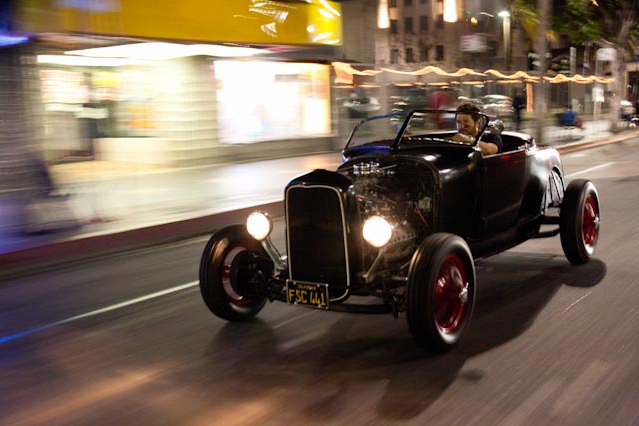 The car being shot was certainly was the highlight of my year. When the issue is released I’m sure I’ll be excited all over again.