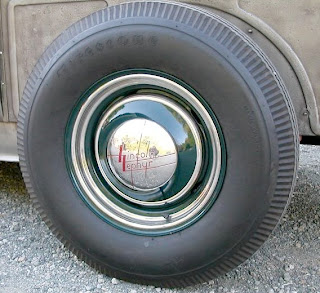 
Update, August 13, 2010: HAMB buddy Chad in the Dakotas has pulled the wheels off his cousin's truck and is selling them to me. Things are looking up!

August 23, 2010: Chad has shipped out the wheels to me!
Everybody else; the search is officially called off.
Good work everyone! Now, let's play some football... 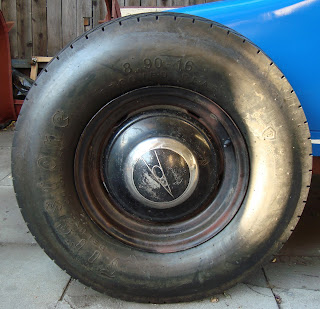 October 31, 2010:  They are on the car!  The wheels needed a little TLC when they were delivered by UPS.  Rusty on the inside due to moisture that had gotten inside the tire and messed up things a little.   But the outside actually had factory paint still on them.
I really had little choice but to take them to get sand-blasted.  So I only had them blast the inside of the wheel rim.  Hey, why not keep the factory paint for a little while longer, right?  Beside the outsides were very smooth.
I got the wheels back and it looked like the surface of Mars --peaks & valleys.  So I ground down the sharp peaks to protect the tubes, before I primed & painted, only the inside of the rims again.  I used my torch to help straiten some rim dings too.
I had Firestone mount the giant dirt-track tires.  The tires look OK, but they're growing on me.