It Was A Good Run, Bye-Bye "Daytons"

Yes, the car has been sold.  Trucked off today, on it's way to a new home --bon voyage mon ami.  Not to France, but to Japan.

It's been great to own this car for the last two years, the best really!  And in that time, numerous doors have been opened to me as an owner of a real vintage hot rod.  I can’t even count all the new friend and acquaintances I’ve made simply by knowing I was associated with this car there were so many. 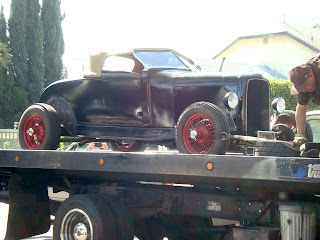 Daytons, you will be missed by many. But I knew I wouldn’t own it forever. Hey, I got to make room, right?!?

I can’t say owning the car has been always easy either, there have been times the car was a real bitch to me.  Sometimes it felt personal!

The car has let me down several times, twice due to ignition problems. Like the time the breaker points broke the morning of load-in of GNRS.  And when the coil that burned out while at the Petersen.  But I sorted those problems out, and the car was better for it.  Giving your car the bird doesn't fix it, I learned

Knowledge, another thing I've gained in the short time it was my car. Priceless info like; how hot rods were build over half a century ago, 3-piece hoods, lead filler, slanted windows, and much more.  Gosh, that A-V8 had it all. I might just miss it more then I thought.