I slept in this morning because there was no need to rush over, I'd already seen all the cars over the last two days.  But I didn't want to miss the HAMB Meet & Greet at noon, among other events.
So I left at 11 o'clock. Little did I know that just the line to park was 30 minutes! Needless to say, I got there a few minutes late.  And I still never met Ryan, the organizer of the HAMB, to shake his hand.

Soon after, my friends Ed, Ed, Tim, & Tim showed up and we proceeded to walk the halls in an effort entertain ourselves further despite the throngs of spectators, it was still fun.  This was actually their second day, I got them in on Thursday.  So they had already seen most of it.

At 2 pm, we were at the Pinstriping Auction to support Tim and to see what he'd donated to be auctioned to help fund Progeria Syndrome research. All I did was clap.

At 3 pm, there was the Then & Now, Customs builders get together.  This is where history's greatest living customizers all came together for a mass greeting a signature session.  A can't miss event! Unfortunately the crowd was so thick I couldn't get near it.

Then at 4 pm, the NHRA museum hosted the Low-Flyers car club panel discussion with Alex Xydias, Phil Remington, Stuart Hilborn, Dick "Magoo" Megugorac, and others.  This time Ed & I had seats.
They all talked about what they built and raced in the very earliest days of hot rodding and lakes racing.  Stu Hilborn may have had some the most interesting stories. He spoke at length about his lakester with the first fuel-injection unit.  The amount of times Stu evaded fatal racing accidents were incredible!  From flipping his car on the lake bed over & over and living through it. To inhaling toxic fumes as a result of an engine fire.  And to narrowly avoiding driving his racer into a 10' ditch, that would have killed him for sure!

This was a real treat for me.  I got to hear about what those early racing pioneers had to do just to gain a few seconds at the track before there was any race car parts available to them.  It makes me feel like what I'm doing the backyard with hand tools, was what they might have done 60 years ago as well. 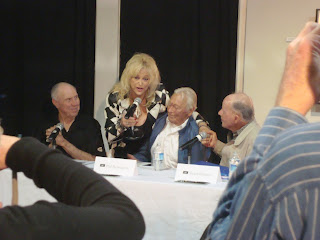 The infamous Miss Linda Vaughn came in at the end to wish Phil Remington a happy 90 birthday, which was today. 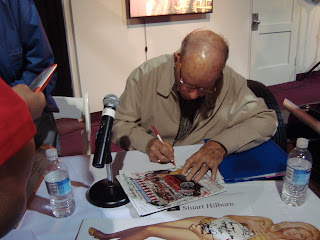 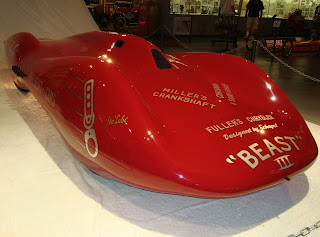 Any time spent inside the NHRA museum is very rewarding.  So many of the best racing cars are here.  They tell a story if you simply study them  with your eyes, each car frozen in time. 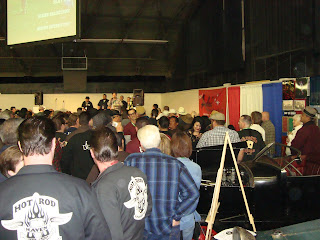 6 pm; The award ceremony at for participants of the Suede Palace getting under way.  There is Daytons boxed in to the right. 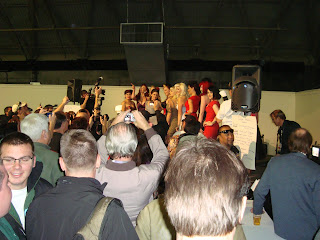 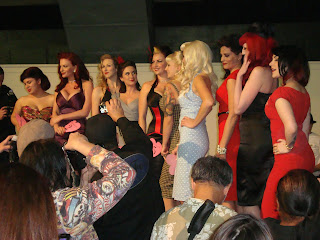 Following the awards was the Trophy Girl Contest.  Each of the 10 beauties was introduced and asked an appropriate question like, "What is your favorite tattoo".
Each lady an example of the "loose city woman mom warned you about", as seen on illustrated movie posters from the 50's. 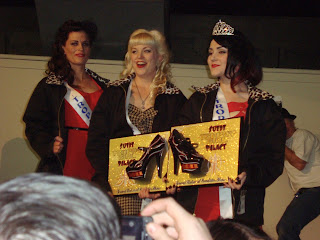 And the winner is... the brunette on the right.  Winners were determined by the amount of applause one received from the crowd.  Making all other judging criteria null.  Apparently she brought all her co-workers to cheer her on.  Although, I must admit she was quite good looking, and knew how to work the crowd.
Posted by AJ Elias