Early on, my friend Ed threw out some estimates of what it could cost to rebuild my 1942 Mercury short block, and I blew it off as an exaggeration. But he was closer to the truth then I though!  Given all the repairs it will to take to save the old thing, it's the my biggest expense as yet.

After getting the report back from Jeff at Jim Grubbs Motorsports, I seriously considered dumping the Merc block!  I have a budget for the engine, and it's about to sprout wings.

The report was fairly grim: cracks --a lot of them, and a lot of thread repairs too.  Cracks from the valves to the cylinders, at least two.  The repair would require drilling & welding, then re-sleeving.  Then there were the many destroyed head bolt threads, at least 9 of them.  But the news wasn't as bad as it could have been; it's all fixable.  No cracks on the main webs to the crank means the block is workable.  The cylinder walls were OK too, but it was already over-bored to 3-5/16"+.040, so it's going to 3-3/8" bore, and that's fine with me.  Jeff thinks it'll be fine too. 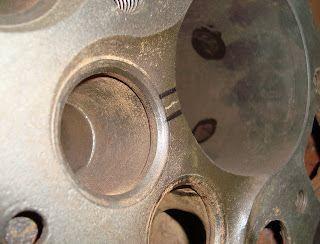 So after a little more sole-searching (aka, wallet-searching), I'm going to have the work done, and I gave Jeff the green light.

Sure I could have looked for another block.  But chances are every one of them could have been as bad or worse.  Plus how often does one come across a pre-war Mercury engine?  Hardly ever... that's how.

Now I need to go shopping!!!  Man-style, we're talking engine parts!  Hold on, I'm still on a budget right? --Damn.  Back on earth again, I'm searching the internet and catalogs, and concluded I'm going to have to get most of the parts from Speedway Motors.  It's not high end stuff, but it will do.

Valves, guides, springs, head studs, pistons, rings, gaskets, and more = $924.  I bought the better pistons for $250, made by Egge.  They are nice, but a bit on the heavy side I think.  Still less expensive then anywhere else.  The springs were a nice surprise, they are Iskenderian.  But the Offenhauser stud kit was a real eye-opener, I didn't think fasteners could look so bad.  The washers are black, the bolts were that gold color plating, and the studs silvery and looked really cheap.  Plus they are a 1/4" too long and are going to stick up.  I'm currently looking for alternatives.

I would recommend the gasket kits made by Best Gaskets especially packaged for Speedway. With great additional features like a one-piece front seal and better rear main seal, and it's still a better price then competitors.

Speedway has the engine parts, but I'd say they are a mid-point between great racing parts and regular restoration parts.

This will literally be the highest tech part on the car despite being a relatively 60-year-old design.