Despite there being no recent updates on the dirt track T roadster build, I have been working on it.

The suspension is done, as is the chassis --for the most part.  So now I've reached that point where I no longer can hold out building the engine, transmission, and differential.  Brakes, wiring, fuel system are easy!  They will come later.  But I have got to start doing the engine stuff now according to the schedule I planned ahead of time. 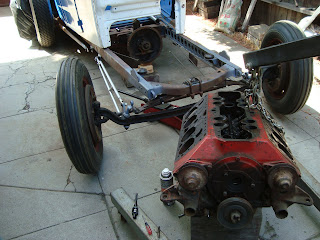 Today I yanked the engine for tear-down.  It's that crusty red thing in the picture.

The first engine in the car was actually a complete, stock, 8BA.  But after a short time I bought this red, former hot rod engine, that seemed much more tantalizing (I'll explain later).  And considering my first Model A also has a 8BA, I thought a prewar engine might be fun. 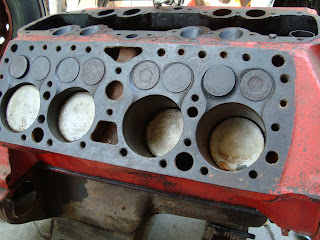 If you are into flatheads, study the engine block.  You might notice the water passages... triangle... circle... trapezoid.  Yes, you are correct, it's a 1941 or 1942 Mercury block.

Basically, a Merc block is the prewar predecessor to the post-war 59AB.  It has the look of prewar engines, but the bigger cylinder bore of what every Ford had postwar.


What's the big deal?  Well a lot of guys way back when would say they had a "Merc engine" to be cool, but there was usually no way of proving it without taking the heads off.

Earlier I mentioned that it's a former hot rod engine.  How do I know?  It's already loaded.

It has an Isky cam, adjustable Johnson lifter tappets, the block has been relieved around the valves, it has an aluminum cam gear in front, and it was painted red --that's how I know. 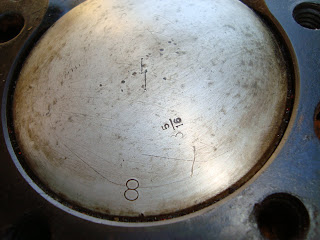 Plus, perhaps the most defining reason may be the over-bore.  It's 3-5/16, pretty big for a Ford block, but a 'safe' improvement to a Merc. 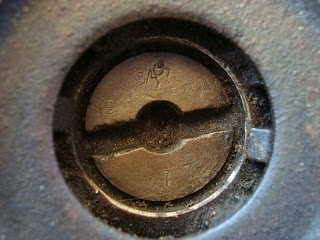 Iskenderian 3/4 race camshaft, the '77', which I've heard is a great cam for the street.  It's a bit "entry level" for me, I'm debating whether to reuse it.  Let's see what it looks like when I pull it first, that may decide it for me. 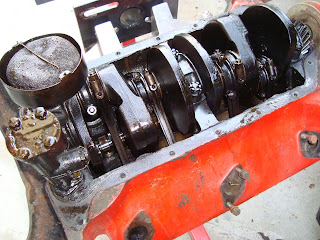 Nothing too special down below, it's a standard 3.75" stroke crank.

I haven't yet found a reason why this engine was pulled from a car to begin with, nothing broken and it's not very worn-out from the outset. 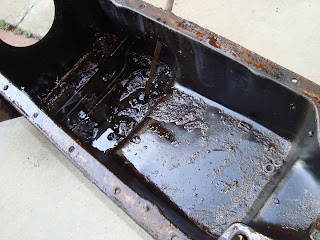 Also normal, sludge in the pan.  Flatties are notorious for sludge.  Ford never did work out a proper oil filtering system for their first V8.

OK, what is next?  Well I have to dismantle it to take it to a machine shop and have the blocked checked for cracks, etc, before machining.

Check back next week for Part 2, if I haven't given up already.
Posted by AJ Elias