Deuce Of Spades: Confessions Of A Co-Star Car 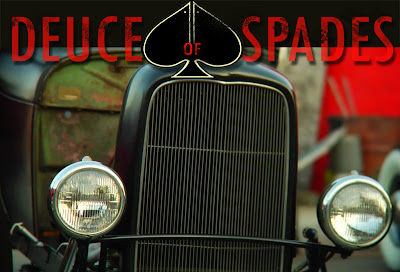 If you are into hot rods, then I'm sure you may have seen, or at least heard of Faith Granger's car-flick, Deuce Of Spades (2010).  A film about woman chasing a guy, chasing a girl.  The movie is set among a thriving car culture in rural So. Cal, 1952.  It happens to have a lot of cool hot rods in it, the coolest of course being my own...

I first met Faith while she was examining my roadster for it's possible worthiness for her project at Bob's Big Boy in Toluca Lake.  Somehow she convinced me to drive to Filmore, about an hour north of LA for a garage scene in her movie. That happened to be the first time I'd driven the roadster in the rain. And wouldn't be the last time I'd sacrifice myself for the film.  But I did it all for Faith --and I'd do it again.


I had my digital camera with me for the drag-strip scene, in Saugus, CA.  It was a big day for the movie, many pivotal plot scenes were shot in that one day, including the fight between "Fresno" & Johnny. 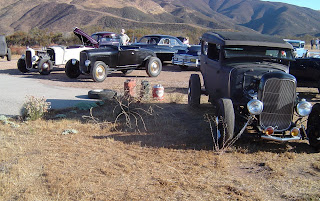 Like most of the car owners and actors in the movie (if not all) it was an all-volunteer effort --which might have been Faith's greatest feat of all.  Everybody was happy to pitch in, to varying degrees of course.  But we were all in the same boat; unpaid and following Faith's faith in herself that she would complete this wholly endeavor.


In all, my roadster participated only four full days to the film.  I say 'only' because there were some that must have given ten-times as many days, or more! They are the unsung heroes for the film.
There were a lot of great people on the shoot, many were car-guys.  So granted, I'm still friends with some. Jerry, Kyle, Sam, to name a few.


I remember almost every moment of the shoot.  Which is odd because I had worked on quite a few movie locations in my early years in show business (production, not acting), and I don't remember that stuff!

Johnny Callaway (played by Timoth Luke) & Art Delaney (Kyle Clifford) talk about girls while they take a break from wrenching on cars.

This was the first day I participated in the movie.  You can't tell now, but it rained most of the drive up from LA.  It was an adventure to say the least.  With no wipers or top: it was a test of my commitment to the project!  Big-rig drivers where giving me thumbs up as I tried to pass them on the steep gradient of Interstate-5 going north.

Due, probably in part to Faith's French upbringing and that the movie was dubbed in multiple languages, she got world-wide press coverage.  Below is an article from British culture magazine Dirty.  The car on the left is Sam's roadster, a Long Beach hot rodder I am now friends with. 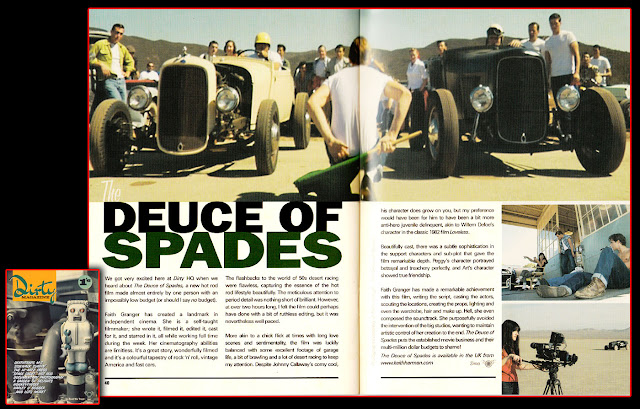