Boxing My Model A Frame 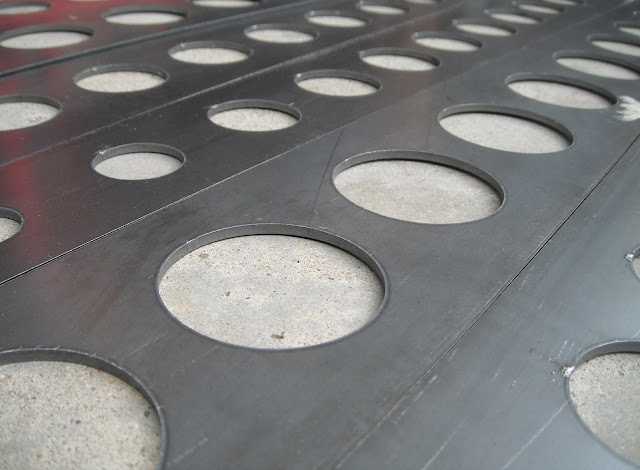 I know... I said I would not box my frame.  But I've come to the conclusion I can't make my track-T's frame stiff enough with just a few cross braces alone.  In retrospect I could have found a better condition frame from the start. But with my budget, I doubt it.  And maybe had I not been so bull-headed, I could have boxed this frame at the beginning and now be further along.

When I built my first Model A, it's frame was in such good condition it hardly flexed at all, and it jaded me for life.  Today I know it was is a rarity to have a original, tight frame.  And that many of Henry Ford's well-used frames now are loose & flimsy require boxing (when hot rodding) because of worn out rivets & rusty rails, etc.


Of course, re-riveting is still done today --but we'll leave that to restorers only.

Now that I have my heart set on boxing it, I considered making my own plates.  But a quick search online found that a kit is probably a good time saver over buying raw plate and custom making what was already readily available.
Ebay had the best deal for me, and this seller even had a 0.10 gauge steel kit with lightening holes already cut out for $100.  Just the thing for the "racer" concerned about his weight.


The kit came quickly and as most kits go, it was made for an entirely stock frame, and meant to be welded to the outside edges of the frame.  It goes without saying, I had to modify it my way.  And if I really have to box it, I'm determined to have the frame boxed on the inside.  Why?  Personally --it looks better and it isn't as obvious.  But to do that required a lot of extra work; measuring, grinding, fitting, grinding, and fitting again.


Special Note: Whenever you consider boxing a frame, there has to be much pre-planning.  If your steering box in mounted in the rail like stock, you'll have to plan for that. All your body mounts have to be determined in advance as well.  The body bolts have to go all the way through the frame to the underside, or a cage-nut or bolt has welded on top or inside the rail.
Here I've welded in flanged nuts, I saw this in Street Rodder magazine recently.  I opened up the hole with a step-drill. Now the flange provides some girth to the nut with which to weld on to. 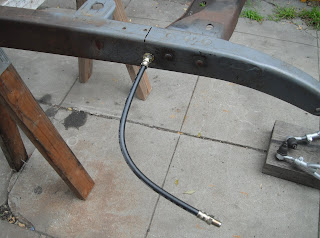 Next, I thought it would be classy to have the brake lines hidden within the frame rails.  Speedway Motors and other catalogs sell brake line bulkhead fittings for boxed frames.  But I'm staying away from many modern hot rodding conveniences.  Plus putting the line in the rail gives a cleaner appearance. Furthermore, it seems bulkhead fitting only come in AN, or 37º flare for aircraft.  All OEM parts are all 45º flaring.


So in the few days it took for the boxing plates to arrive I stopped by Pep Boys on Hollywood and bought 25' of 1/4" brake line and a pack or brake line nuts to start, about $20 in all.  I own all the tools I need to hand make brake lines from previous builds.  I now like to use the roll of brake line, it is less restricting then the pre-flared lengths.

If you've ever flared brake lines at home you'll be familiar with fluid leaking at the new flare.  It's rare to get the perfect 45º double flare with hand tools every time (impossible for me), so I learned an extra step that helps stop leaks before the first installation, I call it 'pre-seating'. 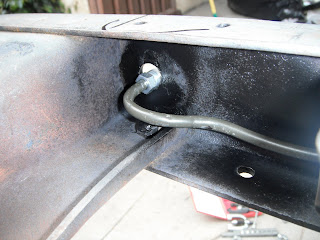 >>>After you have completed the flare (and remembered to put on a nut before you flared the tube), you can pre-seat the flare before final installation.  Once in the car, space may be limited for optimum nut torquing.
Place the female 'receiver' in a vise, in this case, the steel end of a rubber line as seen above coming out the frame.  Screw in your newly flared brake line with a flare nut wrench or box-end and tighten it into the end into the receiver very tightly.  Then loosen and tighten again, perhaps ten times.
You may actually be able to feel the flare being 'seated' under the force of your wrench.  Take the line off, and look at the flare. You'll see it's now shaped more like the flare in the inside of the receiver.  Now you are less likely to have a leak at your first brake bleeding. 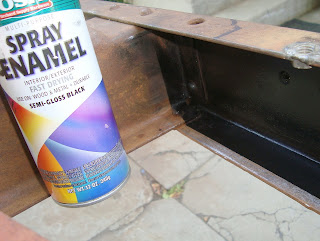 As great as the lightning holes will look in the end, they will still be see-through.  This brought up another detail to be considered --having the inside of the rails look good.
I loosened the rust with wire brushes and gave it an initial rattle-can job.  But by the end of all the plate fitting and additional edge sanding, I now had to repaint it.  I masked the edges this time, and with another layer of paint, I had a nice smooth surface inside.
I also painted the back sides of the boxing plates.

Now that I've trimmed & fitted the plates, plumbed the front brake lines, sanded the edges for welding, and painted the inside of the rails, the easy part is actually welding. 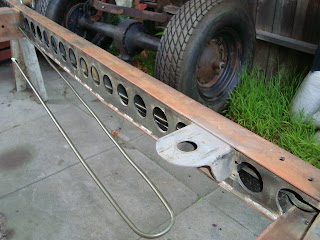 After a little discussion with my friend Ed, I decided to simply stitch weld rather then fully weld in the plates.  Had I installed the plates as the maker intended (on the outside edge), I might have fully welded it for looks, and sanded the welds a little.  But as I put them on the inside, I saw no reason not to stitch it.

Before I tacked my first weld, I made sure my frame was sitting squarely on the sawhorses.  Once the plates are in, it's permanent.


I started the welding by first properly positioning each plate about 3/16" inside the lip of the frame all around, tack welding as I go.  Vise-grip pliers help here keeping the plate spaced. 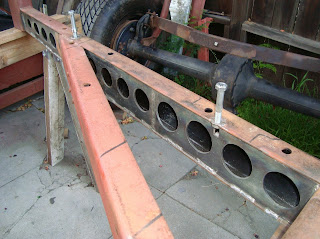 I wanted an even pattern in the stitching.  And it wasn't until I first started welding the bottom edge did I think to weld from the center of one hole to the middle of a blank area on the plates.  I pretty much stuck with that theme throughout the welding.  The result was what looked like intentional spacing --not bad if I do say so myself.
At the top of the frame, I stitch welded the opposite... in other words from the middle of the blank area to the center of a hole. 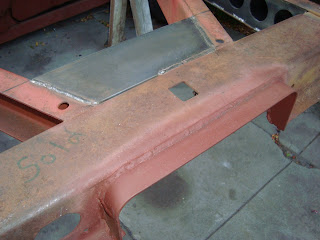 Just over an hour of welding and fiddling I was about done.

I went ahead and welded in some additional metal bar and a plate to the center crossmember as I planned on doing earlier.  The plate will protect the driver from a broken U-joint (you'll see why some time later).


All-in-all I think I did a swell job.  Although now that the weight of the frame is significantly higher, I believe the custom look will make up for it (because it's not really a real race car, shh.) 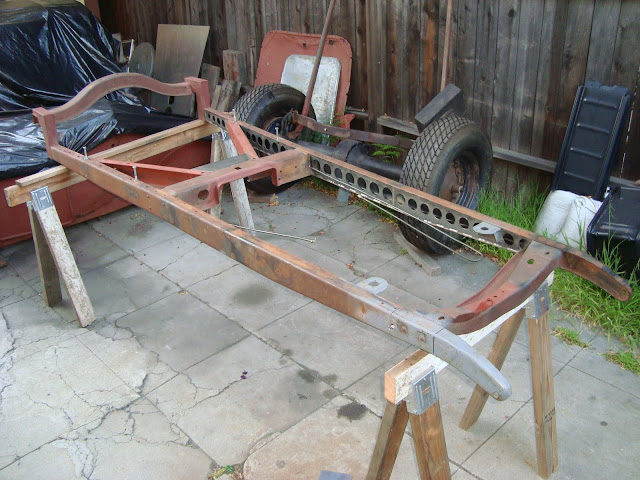 Finally, I performed the "flex-test".  I stuck a coin under the horn of the frame, the frame is so stiff that the other side rose the about the same amount.  A week earlier the frame was so flimsy it would have failed with a quarter dollar and visibly flexed with ease.  Now I can't twist it at all! 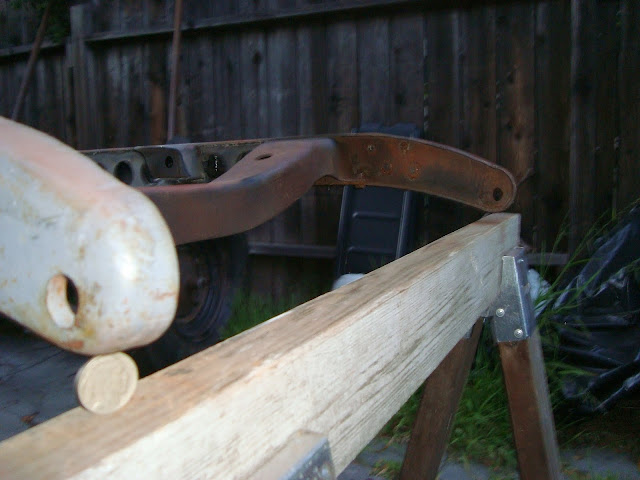