The roadster came home just before Thanksgiving and I have been working on it every weekend since. At first I thought I could drive it to the Mooneyes X-Mass Party in Irwindale, but alas, the car was far from done (besides it rained). Then, I thought I could get it in the Grand Nation Roadster Show at the end of January, but I was apparently too late, the Primer Palace was full. My work slowed, with no date looming I could now take my time.
Since bringing it home I’ve learned a lot about the car, some of it’s history, and more about what it is made of. I had a lot of questions the first day I saw it, unfortunately the builder was dead, so was the owner of the last seven years.
I bought the roadster from the sons of the fellow who bought the car from the supposed builder. I say supposed builder because I have doubts that Bill Bayer, the gentleman who owned the car for 50 years, actually laid the foundation of this hot rod. Reasons I won’t discuss today. But, thankfully the car has not changed much in its 50+ years of life and from the photo record I received with the purchase.
Lets look at some of the photos I’ve taken. 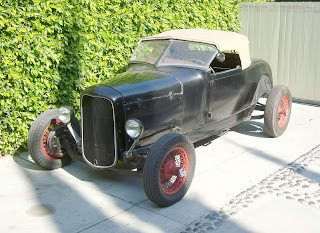 Here is the car assembled, it has a great classic hot rod look. I like to say, “Hot rods are about the parts they are made of.” I am impressed at all the great, old parts here. Some of the first things you see a first glance, are the wheels. 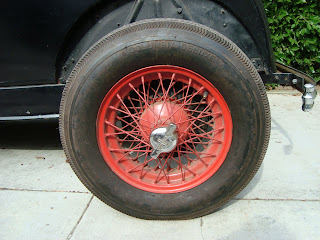 Red wire wheels, and not just any wheels --American made Dayton Wire Wheels. After some investigation, I believe they date back to the late 1930’s to 40’s. Next you might see the 1932 grill or the slanted windshield. 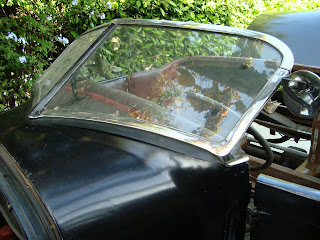 That awesome windshield is probably one of a kind, probably entirely hand made. The front grill is of course an original, naturally it has had the filler smoothed on top. 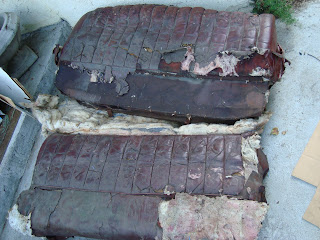 Once beautiful leather seats were, unfortunately, left out in the rain for a few years. I nor the sons know why their father did this. But I’m sure it wasn’t intentional. Their father took ill a few years before his death in October 2009, and so the car hadn’t ran in years. Also gone, answers to many questions.
Working on the car, there were many unfinished projects going on. The engine was filled with paint thinner as was the gas tank. Wires were loose, and the brakes half re-built. Projects I was poised to finish happily.
Another thing you see right away is the Deuce frame. It is an original too. Remember the car was built in the 40’s or 50’s, it would be 30+ years until a ’32 frame was reproduced. The hood is a three-piece set-up common on vintage rods, this was likely made by Bill himself. The quality is at a lower standard to the foundational built, although it looks great, it is a little flimsy.
Under the hood, a 1940's Mercury flathead V8. That might account for the 1941 Mercury title the car came with. But that is no average flathead engine, in fact it isn’t an average Mercury flathead. I will discuss the engine in a future post. 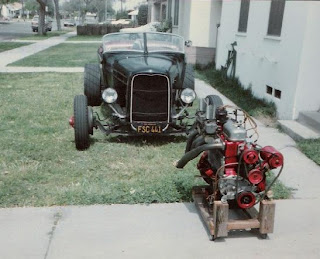 This hot rod was originally built with a Model A or B 4-banger, and that is a Crager overhead-valve add-on on top. A rare item today, and to my dismay, the banger is long-gone. For a while I though the 4 cylinder was in the old garage, but it was something else –what a shame.
What next? I hope to have the car on the streets of LA very soon. I’d like to find some old two-tone red leather for the seat. I've been told it isn’t made anymore, I’ll search for it anyway, the car is worth the effort.