Where Were You All These Years?

It’s hard for me to believe what has happen to me in the last few days. Saturday I bought one of those "dream cars", like the stories you hear about a fellows finding a Cobra in an old barn. Well, early hot rods from a by-gone era are just as rare. And finding a survivor practically compete and original to the days it was built is as rare. Its former owner had just passed away a week prior and the family is liquidating his car collection. I was the lucky guy that called first!
It’s all I have been thinking about for the last few days since I saw & bought the car. I still don’t have it home yet, it’s still buried in their garage. Of course he was a hoarder, hot rodders often have that problem. But thankfully, he was smart enough not to change the car too much from it original appearance.
I still don’t have the complete picture on the history, a conversation with the widow is in order. But what I do know from talking with the son is that it was owned by a neighbor who also dead only five years ago. And this guy bought it from that widow. He drove it into the garage and it has sat there since. Whether or not the neighbor built it still has to be discussed. 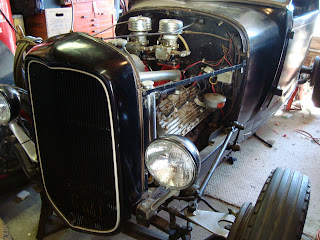 I loved it from the first sight in a Craigslist ad. I knew right away, that this wasn’t an ordinary roadster. Nobody today puts those wheels on their cars today. And, I haven’t seen a padded dash on a car built in the last 40 years.
The next day, I got to see it first, it was in a packed Long Beach garage. It didn’t take much more then a peek at the partly buried roadster to know it was ALL REAL and it was old. Within five minutes it was mine.
The body, an original 1929 Ford Model A Roadster had been modified in a way that only could have been done prior to the 70’s. The car looked 10x better in person then it the two measly Craigslist pictures I saw only hours earlier (above).
The frame is an original ’32 frame, pinched to fit the body was so clean, with holes filled, no boxing inside. The grill is also an original Deuce, smoothed on top. 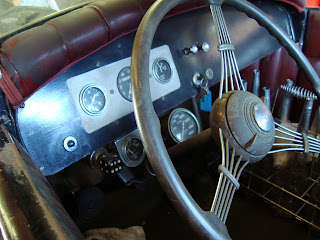 The engine, and 59A flathead with Edelbrock’s first performance heads, the block letter version. There is a hard to find sprint-car oil filter on it and two 97 carbs on a home-made intake.
Then there is the interior, cracking ox-blood color Naugahyde stuffed with cotton filling. An original ’39 Deluxe wheels, a 60 year old 8000 RPM Stewart Warner tach strapped to the column. All vintage, all old, all really-really old –I had sensory overload!
Now the wheels, the Pièce De Résistance, a set of super-early Dayton wire wheels, almost too rare to believe. I have only seen one other rod with wheels like these in the past ten years, and that was in a magazine. Knock-offs, could be race wheels, I don’t know yet. But I do know, this car, with those wheels 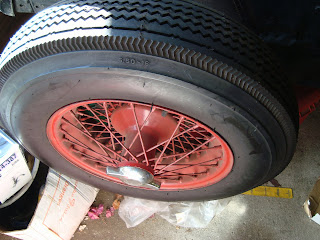 will command attention by themselves.