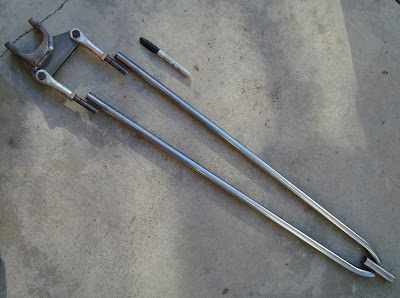 Not happy simply using split wishbones, I had to make my own suspension parts.  I'm aware that none of the cars in my earlier post, Dirt Track Inspiration, had hairpins.  But in actuality, many did. 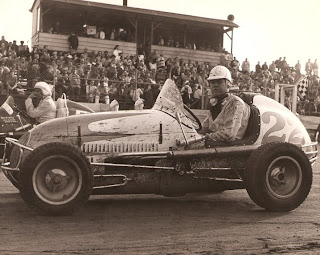 The roadster-racer was basically one step down from Sprint & Midget cars, and some parts interchanged.  I am going to assume that guys who were racing roadsters, also watched the Sprint action, and took away some of what they liked about those cars.  Then adapted what they'd seen to their home-build racing cars.

For me, fabrication is probably the most fulfilling parts about hot rodding.  I may not have all the tools I'd like just yet.  But I have the basics, and that is all I really need to make a driving car.  And with the recent addition of a oxy-fuel torch, cutting & bending heavy metal just got a lot easier --although a band saw would be nice sometimes. 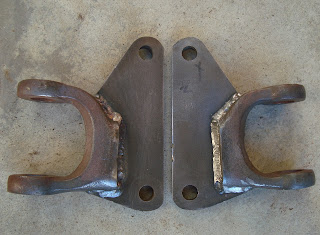 To start, I used 3/8" cold-rolled steel plate to make batwings which I then welded to the front ends of a severed Model A wishbone.  You might be asking, "Why hairpins instead of split 'bones?"  Well, the hairpins are caster adjustable --somewhat important on a racing car.  Split wishbones have fixed caster. 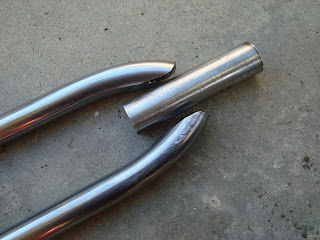 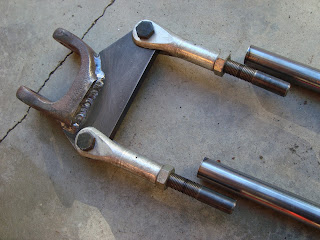 Shopping for clevises I wanted wasn't easy, because the selection isn't so great.  Typically, the threaded end on a male clevis is either 5/8" or 3/4", so matching a male clevis with a tube IDs available isn't easy.
I also didn't want tube that was too big or too small. Otherwise it might look out of scale with the rest of the car.
A stop by Specialty Ford Parts in Rosemead netted these female clevises; also nuts, bolts, & threaded studs.  Jim Gordon says they are the last of 'em, sorry fellas!  I've never even seen them in catalogs, because they are old --drilled for safety wire too! 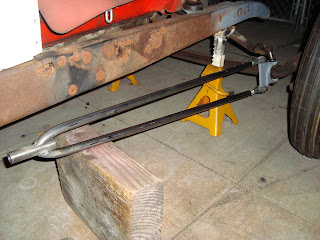 All that is left now is to trim and weld in the threaded stud and install on the car.  Unfortunately, the sun goes down early and I can't weld in the dark --next weekend.

After welding it together, I threaded the tie-rod-end tube while in a vise & split the tube with a saw.  Rather then a locking nut, I'll use a tie-rod clamp.
And eventually, I'll get the whole thing chromed. 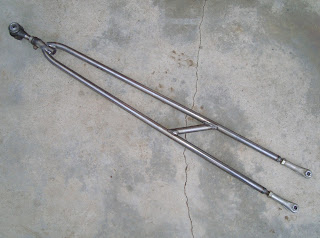 Update, Jan 1, 2011:  The rain let up long enough that I was able to finish the welds and give the hairpins a light paint job.
I added a fancy angled piece of tube to the middle  of each side to add extra strength. 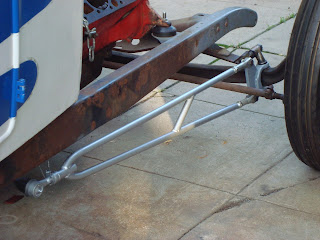 I don't need to modify the spindle steering arms now.  The drag-link can go through the hairpins rather then over or under split bones.