Letter to the Editor (Art Director)

Rod & Custom Magazine wants to take photos and write an article about my Craigslist find. I feel very honored and so thankful to people over at R&C for their enthusiasm about the Daytons. Aaron Kahan, Art Director at R&C, and Tim Sutton the photographer are really swell guys, I’m really glad that I’ll be getting to know them.

Today I grafted a letter to them with and update and some great news I got recently.
"Hi Aaron & Tim, I just wanted to update you on some news gathered about the roadster. I have a proper spelling on the guy who owned the car for over 50 years, William (Bill) Bair. Turns out he had lots of friends, I discovered this after finally bumping into the other guy (purple shirt) 'Fredy' at the Pasadena Reliability Run. Fredy and Dave Lazardi, had lots to say about Bill --for instance, Bill was a fan of sprint/midget cars, the reason the car has Dayton wire wheels. Bill & Fredy were good friends it turns out, Fredy says he'd even driven the car in the past. I'll include what I've learned in the tech-sheet.

I also bumped into a fellow at the PRR that has a strikingly similar blue roadster as compared to my roadster. Turns out, Jim Foltz of N. Long Beach bought the car from Don Montgomery's car lot only blocks from where my car lived for 50 years near the intersection of 70th & Olive Ave. This isn't a coincidence either. Because the similarities go a lot further then the leaded in cowl and V-windshields. The 32 frame on Jim's '28 A has built details that could have only been done by the same person, we both think our cars related --like family. 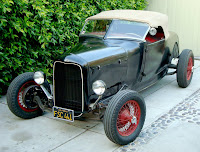 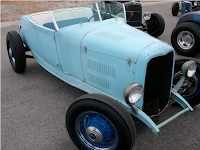 Jim's father, and old time local race car driver actually remembers Bill Bair, knew he was into race boats & roadster racers too. Jim also found several other Long Beach natives who remember Bill as well. It seems the hot rodding world just gets smaller and smaller.
Jim & I are working together to gather more fact, perhaps nailing down who actually built the cars originally, whether it was Bill or someone else. --AJ"